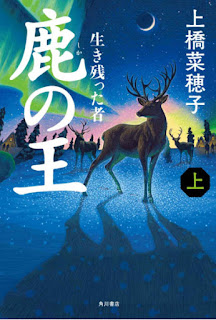 鹿の王 (shika no ou, The Deer King, 2014) is a fantasy novel by UEHASHI Nahoko (上橋菜穂子, born 1962). Uehashi is best known for her fantasy series, 精霊の守り人 (seirei no moribito, Guardian of the Spirit), which was the basis for a successful anime series and more recently for a live action television series. The first books of the series have an English translation, by Cathy Hirano (Moribito: Guardian of the Spirit, 2008 and Moribito II: Guardian of the Darkness, 2009). My only knowledge of that is from watching the anime series (and one episode in the middle of the live action series), but if that is anything to go by, The Deer King has a lot in common with Guardian of the Spirit. Fantastic elements are an important part of the narrative, but for much of the time we are nearer to (pseudo-)historical fiction. A variety of characters are at work in the story, most of them loyally serving some higher interest or some ideological principle. As in Guardian of the Spirit, scientists and scholars are key actors, although the major role is reserved for a warrior. 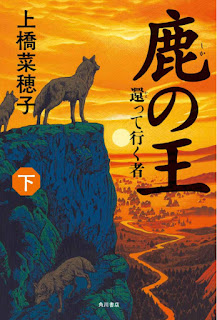 The story is set in a what had once been an independent kingdom, which many years ago came under the rule of an expanding empire. The imperial rulers have colonised some parts with people from their own country, sometimes leading to the displacement of the original inhabitants. The original monarchy and its administration is still active, subordinate to the empire, but sometimes secretly pursuing its own ends. Various peoples within the former kingdom and other parts of the empire also have their own interests. In particular there are the remnants of a civilisation once almost wiped out by plague, which now survives as a kind of politically active university devoted to medical science.

The lead character is Van, the leader of a group of soldiers who had been fighting a hopeless mission to defend their country from the encroaching empire. Van had expected to die in the war, but somehow he ends up a prisoner, chained with other slaves in a salt mine. A sudden vicious attack interrupts this hopeless existence. Wild dogs with strange skill and purpose race through the mine attacking everyone in it. Van defends himself, but he too is bitten. The dog runs off; but the bite carries an infection. When Van regains consciousness, apparently some days later, he finds that all his fellow prisoners are dead. Breaking free of his chains he searches the camp. The guards, prisoners and other workers are all dead. But in one hut, a woman had died hiding her baby daughter from the dogs. With this little girl, whom he calls Yuna, Van sets off out of the camp.

An attack like that on the mine also visits the kingdom's court, leading to several deaths and infections. Court doctor Hossaru starts to investigate, visiting the mine with his servant Makoukan. (At the start of the story Makoukan is the viewpoint character, so that Hossaru can be a Sherlock Holmes type genius, whose thought processes are concealed from us; but half way through we switch to seeing most of Hossaru's narrative strand through his own eyes.) Deducing that a survivor has got away, and keen to find him for the insight he might give into the disease (which resembles the plague that killed his people), Hossaru with the support of an influential nobleman in the imperial administration sends out a tracker from a village of basically ninjas (I've forgotten what they're called in the book), Sae, the daughter of the village chief. These and other characters interact, as different parts of the kingdom's government and the unseen plotters of the attacks pursue their goals.

The narrative does not give many clues to establish just what stage the civilisation portrayed is at, although it is certainly a pre-industrial world. The medical science portrayed goes well beyond what one might expect from such a world. Many aspects recall more recent biological research, some even from the last few decades, although without the theory of evolution that lies behind much of this thinking. To a large extent this is nearer to a medical science fiction novel than a fantasy. The interrelationships of parasites and of organisms in symbiotic relationships or of organisms and the environment and similar concepts then become a symbolic reflection of the interrelated nature of society or the connection of individuals to the social world around them.

The two strands of the personal story of Van, displaced from life by the loss of his family, finding and perhaps losing again his place among people and the larger story of a threatened epidemic move towards their climax over various twists and turns. Refreshingly, the stakes in the larger story are allowed to become less than world destroying while still being serious. In general the story reads well, but some of the political and environmental complications came across as constructed rather than narrated. Long and slightly clumsy exposition of invented history or scientific background also sometimes took over the narrative, even quite late in the story.
Posted by nigel.holmes at 05:24