Matatabi Travel (またたびトラベル, 2004) is a children's book by MOICHI Kumiko (茂市久美子, born 1951), made up of a series of linked stories. The "Matatabi Travel" of the title is a small travel agency in the second floor of a dilapidated residential house, "Matatabi House", approached by a rickety staircase on the outside of the building. This is one of those mysterious shops that seems to be have appeared out of nowhere. Matatabi is the Japanese name for silver vine, a plant which seems to be the Japanese equivalent of catnip. The almond eyed young man who runs the travel agency is in fact a cat; and his customers are or become people who look after stray cats.

The stories are essentially modern fairy tales, but with a linked setting and theme. As you might expect in such stories, most customers come upon the building by chance. Often they are not even looking to book a trip when they go in.


By the way, Saburou had not come to Matatabi Travel on purpose.

He had been working late into the night, and on his way back home, for some reason, he had wandered into a narrow alley he never went down. On top of that it was raining horribly. The place he happened to seek shelter under was the eaves of Matatabi Travel's building.

There was a light on in Matatabi Travel and an 'Open' sign hanging in the door.

'Hey, they're working pretty late. It doesn't look like the rain is going to let up. I'll pass the time a bit in there.'

Some of the stories seem a little flat to me. The 'fairy tale style' tends towards a certain restraint, a deliberate simplicity, which can lead towards a feeling of lack of substance when the subject matter does not compensate. The stories are more comfortable than thought provoking or impressive. Perhaps the most distinctive thing the book does is reflect its young readers' nervous anticipation of the adult world waiting for them. The customers are all young adults. Their problems are the kind of problems that face young working people, finding work, affording a home, loneliness, the feeling that they have made a wrong choice.
Posted by nigel.holmes at 04:41 No comments:

[You may want to check the warning on this blog's translations.]


This story completes the translation of the book Boy Science Detective by KOSAKAI Fuboku. Previously we had:


As Kosakai promised in the preface, he did go on to write more Boy Science Detective stories; but having translated a whole book (even if it's not a very long one), I think I'd like to give my attention to the works of some other writers for a while.

The story was first published in 子供の科学 (kodomo no kagaku, Children's Science) from July to September 1926. You can read the story in the original Japanese on Aozora Bunko here. I've put in footnotes that look like this[1]; I'm afraid that they aren't actively linked. You'll have to scroll down (or use find) to the footnotes at the end. As always, I've put the translation after the break, so click to read on.
Read more »
Posted by nigel.holmes at 01:24 No comments:

Boy Science Detective: The Wisdom of a Fool


[You may want to check the warning on this blog's translations.]


Another translation: this is the fourth Boy Science Detective story by KOSAKAI Fuboku. Previously we had:
Most of the stories from the series have had something in them to make them worthwhile. To be honest, this one is one I might have been tempted to leave untranslated. It does not have much of the detective or scientific interest that the other stories had; and its central idea is one of the worst plot elements of the detective story (and probably back around 1600 people were saying, "I don't know, Will, that scene seems a bit clichéd to me"). But since I was already two thirds of the way through the six stories that made the first collection, I thought it was a pity not to translate the whole book.

The story deals with intellectual disability, in a way that did not ring true to me; but that may be because the people I have known were more mildly affected. The question of what language to use comes up here. In general I mostly aim for the most polite expression which still sounds more or less like something someone might have said at the time. But I don't know how successful I was here.

The story was first published in 子供の科学 (kodomo no kagaku, Childrens' Science) from January to March 1926. You can find the original Japanese on Aozora Bunko here. As always I've put the translated story after the break; so click to read on if you're interested. 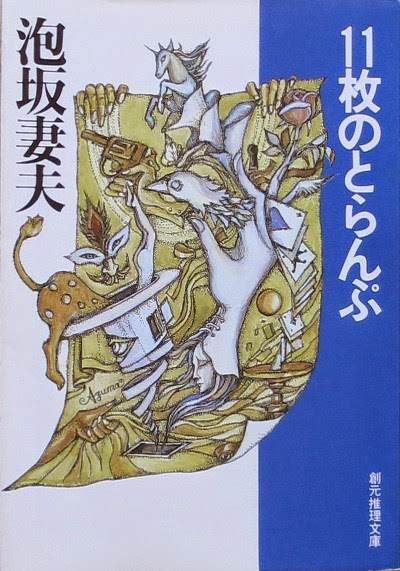 The puzzle detective story is itself a curious thing; and it is not surprising if its writers are often interested in contrivances and curiosities. I don't know of any writer who shows a greater fondness for such things than AWASAKA Tsumao (泡坂妻夫). He was an amateur magician himself and his books often feature such things as stage magic, intricate mechanical toys, codes and word puzzles. Some of them are themselves intricate toys, not just in the mystery, but in the construction of the book. These enthusiasms are already on show in his first full length mystery 11枚のﾄﾗﾝﾌﾟ (juuichi mai no toranpu, Eleven Cards, 1976). The setting is the world of amateur magicians and the story features a book within a book that is a necessary part of solving the mystery.

The amateur magicians' club in the little town of Majiki (真敷) is putting on a show. We see the performances of each of the eleven members. Some go perfectly, some are disasters. At the end comes the worst failure of all. Shimako (志摩子), the young woman who was supposed to appear as part of the final magic trick in which everyone takes part never turns up. The other performers are left standing on stage while the meaner children in the audience start chanting, 'It's gone wrong, it's gone wrong.' After the show, one of them, a police doctor, is called away. When he returns, he is accompanied by two policemen. They have found the missing Shimako murdered in her nearby flat.

Stranger still, arranged around her dead body are a variety of objects, all broken. They all point to one of the stories in a book that one of the club members had written, Eleven Cards. This book forms the central part of Awasaka's Eleven Cards. The stories could be called detective stories, but they are not detecting crimes. They describe magic tricks, each one performed by a member of the club (the same people we have just met in the outer story), either on the other members or in their presence to a different audience. The other club members puzzle over how the trick could have been done, until one of them comes on the answer. The fictional author's prologue emphasises that as he has no powers of invention himself, the stories are taken from what really happened in life.

The final part of the book returns us to the outer story. Several months after the murder the club members are gathered at an international magic convention in Tokyo, where some of them are performing. In the midst of the chaos of the convention, the club members find new clues to the murder.

This is an incredible first novel. As often in Awasaka, not everything works; but the invention and ambition is really impressive, and the trick stories in the middle would be an interesting idea even if they weren't supporting a larger mystery.

Shots exchanged across the Atlantic

This post has major spoilers for Unnatural Death by Dorothy L. Sayers and The Greek Coffin Mystery by Ellery Queen. So read no further if you haven't read those yet.