A Big 1st Year and a Little 2nd Year 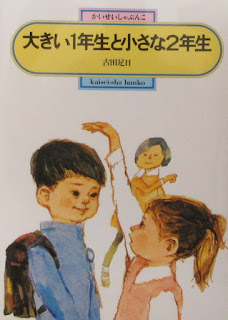 大きい1年生と 小さな2年生 (ookii ichinensei to chiisana ninensei, A Big 1st Year and a Little 2nd Year, 1970) is a children's book by FURUTA Taruhi (古田足日, 1927-2014). The title characters are in their first and second years of elementary school (小学校, shougakkou), so probably six and seven years old respectively. The book too is clearly aimed at relatively young readers.

Akiyo and Mariko are the two smallest children in the second year, small enough to be mistaken for kindergarten children; and of the two Akiyo is just slightly smaller. She had somehow had the idea that, since second years are taller than first years, she would get taller at the start of the new school year (which is also the start of the book). For all her small stature, she is tough and self confident, not shy of quarrels with other children. Her friend Mariko, by contrast, is quiet, calm and a little detached. Masaya, a new first year, whose family has just moved to a house near Akiyo's, is large enough that people sometimes think he is a third year; but his character is the exact opposite to Akiyo's, anxious to the point of cowardice.


The elementary school that Masaya and Akiyo walked to was on top of a hill. There were apartment blocks on the high ground. Akiyo's friend, Mariko Fujioka, lived in one of them. The school was just beyond the apartment blocks.

From Masaya's house to the school and the apartment blocks, there were two routes. One was a broad road up the hill, with lots of traffic. The other, the one that Masaya was now walking, was a narrow path up between two cliff faces.

On the way to the school entrance ceremony, Masaya's mother had taken him up the broad road, but after the ceremony, the teacher had said, 'The broad road with all that traffic is dangerous. The way you should take to school is the track through the cliffs.'

So when it was time to go back, mother said, 'Masaya, this time let's go by the cliff way.'

'No. I don't want to go that way,' Masaya said to his mother with a scared face.

'You're a first year now, Masaya, big enough to be taken for a third year. If you can't manage something like that path! The teacher told you that was the way you should take to school.'

Mother gripped Masaya's hand tightly and pulled him along. Masaya was dragged along, almost crying.

That was why Masaya was walking along the cliff route; but he was clinging tightly to his mother, because it was so scary.

It wasn't just narrow, it was dark and there were steep cliffs of red earth on either side, topped  with thick woods. In the midst of those woods, there were huge pine trees that you could see from Masaya's house, and in their tops crows would call, 'Caw, caw' from time to time.

Akiyo quarrels with Masaya on their first meeting, but they soon become more friendly; and Masaya comes to depend on the fearless Akiyo a little too much. Worried about losing her friendship, he starts to consider how he can become braver.

This a simple story of real life, narrated in a simple style for young children. For all its simplicity, I think it does a very good job of depicting the friendship at the heart of the story, and also in communicating a sense of place, in this country district on the outskirts of Tokyo. And although the events that make up the plot are never far from the minor incidents that make up normal life, the story's progress still feels very satisfactory.

Posted by nigel.holmes at 08:13 No comments:

After deciding to return to blogging, but only for books for which I feel some enthusiasm, my first review goes against that decision. It's a solid but unremarkable collection of short stories, by TAKAGI Akimitsu (高木 彬光), 最後の自白 (saigo no jihaku, The Last Confession, 1967). Takagi was one of the major post war writers of traditional puzzle mysteries, with some classics to his name, especially in his earlier works. There are six long short stories in this collection, all featuring public prosecutor, 近松茂道 (CHIKAMATSU Shigemichi).

Chikamatsu is one of the prolific Takagi's many detectives (he is not even the only prosecutor detective). As a prosecutor, he is involved in the case, but only at a later stage. Most of the investigation is done by the police, who report to Chikamatsu and take advice from him. A common pattern is for the police to fix on one suspect, but find Chikamatsu unwilling to prosecute without further investigation. Each story has a different investigating policeman. At least, they have different names. If there is any difference of character, it is hard to detect, except that some stories demand that the policeman be a little more stubborn and obtuse than the average.

All the stories are traditional mysteries, with attempts at misdirection and alibi tricks, some moves towards impossible crimes, though nothing that fully qualifies as such. Two feature a floor plan. Most have a second murder. The stories generally aim for a little originality in the framing to catch the reader's interest, but most still feel a little bit routine. The same goes for the puzzle element. For the most part the likely reaction to the revealed solution is 'Okay, fair enough' (except for couple where most readers would probably wonder how the killer could pick such an improbable approach to their problem).

パイプの首 (paipu no kubi 'The Pipebowl'). Two policeman notice a parked car on a lonely mountain road as they drive past on a different errand. Seeing it still there as they drive back hours later they investigate and find that there is a corpse a the bottom of the roadside cliff, the brother of an importer of French luxury products. When a secretary in the same firm is murdered, the bowl of a pipe is found lying next to her dead body.
影の男 (kage no otoko 'The Man in the Shadows') A wealthy man's family is gathered for his last hours. Moments before his death, one of his managers rushes in with news that the eldest son has been murdered.
愛と死 のたわむれ (ai to shi no tawamure 'The Play of Love and Death'). Police suspicions soon fasten on the wife of a murdered man; but Chikamatsu is cautious.
かみきりの情熱 (kamakiri no jounetsu 'The Passion of the Mantis'): an inverted mystery. A woman has an almost foolproof plan for the murder of the lover who rejected her.
消えた死体 (kieta shitai 'The Missing Corpse'). Late at night a constable is called out from his kouban by a man claiming to have seen a murder in a different apartment in the building where he lives. But although the man had set other residents to watch the door, when they enter they find an undisturbed room with no corpse and no sign of a struggle. The constable remembers that the day is April 1 and decides that this is a joke; but later that night, the man who lives in the apartment rushes in to say he has found the body of a murdered woman there.
最後の自白  (saigo no jihaku 'The Last Confession'). When a blackmailer is killed, three people each claim to be the murderer. Which is the real killer, or is it someone else entirely?
Posted by nigel.holmes at 05:29 1 comment:

If you look through the list of blogs at Ho-Ling's blog, you will probably notice that most of the few English language blogs on Japanese crime fiction have one by one stopped posting.  This is not (I hope) a case of a serial killer targetting English language crime fiction bloggers. My own absence has been due to various reasons, such as work and lack of enthusiasm for sitting in front of a computer in my free time. I have been reading Japanese books, but some mysteries and children's books (the main content on this blog) disappointed me, so that I wasn't keen to review them. I've been reading more literary books recently, which don't need a review from me, as there are doubtless plenty of scholars writing about them. I still read some crime fiction and children's books though, and there are a few books I'd like to write about. I expect to start posting again, but with much less frequency than before.
Posted by nigel.holmes at 03:18 1 comment: