The Man Who Climbed to Heaven

“My father and mother were honest, though poor—”
“Skip all that!” cried the Bellman in haste.
“If it once becomes dark, there’s no chance of a Snark—
We have hardly a minute to waste!”

(Lewis Carroll, The Hunting of the Snark) 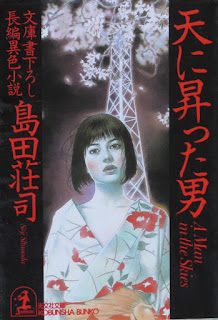 天に昇った男 (ten ni nobotta otoko, The Man Who Climbed to Heaven, 1994) by SHIMADA Souji (島田荘司) opens in the execution block of a Japanese prison. Like America, Japan still has capital punishment, although normally reserved for murders seen as particularly worthy of punishment (such as multiple murders). KADOWAKI Haruo (門脇春男) has been on death row for decades, while his case, uncontested on his part, proceeded up through the courts to the final judgement. But when the day of his execution arrives, Kadowaki miraculously survives and is released.

For the rest of the book we follow him as he returns to the little town in O. prefecture in northern Kyushu where the crimes he was arrested for were committed. (I imagine readers will guess that O stands for Oita. You find this kind of coy documentary style of naming from time to time in Japanese fiction; I'm not quite sure what it means.) Along the way he thinks back on the events leading up to his imprisonment. This means that most of the short book is a long series of flashbacks from his childhood through the various jobs he had in life and his failed marriage up to the actual crime.

I'm not very fond of flashback narrative in any case; and when it takes up most of the book, my tolerance gets even thinner. As we approach the end, the possible surprises in the narrative are thinned out. In the end the narrative structure has its justification, of a sort, although readers may not be entirely surprised to find that it is a version of storytelling's second most hated narrative idea.

Posted by nigel.holmes at 07:30 No comments: