In the title story, a detective on the team hunting for a man on the run after a robbery gone wrong turns to murder thinks that the best lead is the woman he once loved, now living a quiet, married existence in far away Kyushu.

In 顔 (kao, "Face"), a stage actor in a minor theatrical group is starting to get small parts in films. When the chance of a larger role comes, his future looks promising. The only problem is that he knows that there is an eyewitness who can connect him to a murder several years back. If he becomes more famous, it is only a matter of time before the eyewitness sees him in a film and can identify him to the police. Before things get that far, he needs to get rid of the eyewitness. An excellent suspense story.

声 (koe, "Voice") is a counterpart to "Face". A telephone operator on a Tokyo newspaper makes a wrong connection in the middle of the night and gets insulted by the irritated person on the other end of the line. The next day she learns that the occupant of the house she had misdialled has been murdered and realises that she has heard the voice of his killer. This story divides into two parts, a suspense story and an alibi breaking story. Each is good in its own way (with some minor implausible elements in both), but they don't really seem to belong in the same short story.

The basic idea in 地方紙を買う女 (chihoushi o kau onna, "Woman buying a local paper") was already used as a minor plot element in "Face". A woman who needs to keep track of the news in a provincial town orders the local paper, claiming to be interested in the novel being serialised in it. The paper informs the novelist of this flattering news, and again when she cancels her subscription. The novelist, irritated by this insult, starts to wonder if she had some other reason to order the paper.

In 鬼畜 (kichiku, "Monster"), a skilled print setter works his way up to owning his own, moderately successful print works. He starts to use some of his spare money supporting a mistress, and eventually three children. When business gets worse he can no longer support his second family and the mistress ends up leaving the three children with him. Encouraged by his angry wife, he starts thinking that the children may not be his and his life would be much easier if they were gone. Matsumoto is sometimes taken as a standard bearer for a "social school" in Japanese crime fiction; and this could be taken as a good example of that. (If you click on the social pages of a Japanese newspaper, you'll find that much of what's reported under that rubric is crime.) The story reads like it originates in response to the reaction most readers of reporting of instances of horrifying cruelty have: 'How could anyone do something like that?' There's a 1978 film by NOMURA Yoshitarou, which I haven't seen.

一年半待て (ichinenhan mate, "Wait a year and a half") presents first a "social school" story of a woman who kills her abusive husband in defense of herself and her children, then turns this around in a conversation between a mysterious man and the campaigning journalist who championed her. Reconsidering the evidence the visitor shows the unwilling journalist that there must be more to the story than she thought.

In 投影 (touei, "Projection) a lazy journalist quits a major Tokyo newspaper and takes his severance to a seaside town in provincial Shikoku. As the money runs out, he first allows his cabaret hostess girlfriend to support him, then finally takes a job with a tiny scandal hunting independent paper run by a cranky invalid. Soon the reporter's dormant professionalism is reawakened, as he gets on the track of local corruption and then murder. This is an enjoyable story, with some ingenuity in the trick of the story; but as in "Voice" there is some mismatch between the realism of the motive and setting and the detective story unreality of the crime. In addition, the trick is distinctly implausible in any context, both physically (though this felt like something that a writer could make plausible with a few minor changes) and as a method someone might choose.

カーネアデスの舟板 (Carneades no funaita, "The Plank of Carneades") is a sarcastic little story about academics in postwar Japan. After writing nationalist history under the former regime, a young professor successfully tacks left to succeed in the world of textbook publishing and popularisation; but when changes in the committees that oversee textbooks makes a swing back to "great men" and national history desirable, his old professor, rehabilitated through his help, threatens to overtake him. The title is from an ancient thought experiment about whether it is justified after a shipwreck to push away a drowning man from a plank that can only support one person.
Posted by nigel.holmes at 06:08 No comments: 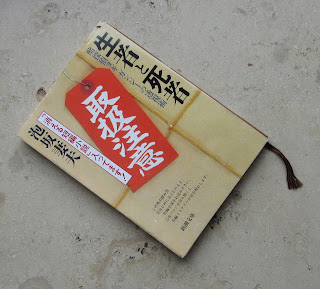 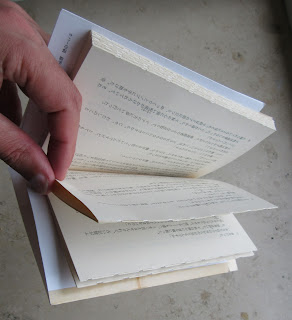 I reviewed The Book of Happiness by AWASAKA Tsumao (泡坂妻夫, 1933-2009) last year. That book was characterised by a bit of trickiness that readers were requested not to reveal, making a review a little difficult. Its sequel, 生者と死者  (seisha to shisha, Living and Dead, 1994) is also a very unusual construction; but in this case its unusual features are evident from the start. In fact there's a big warning label on the cover telling you how to read the book. Most books are made up of gatherings or quires (if I'm using the words right). The printers print large pages then fold them to make a set of folded pages, with one pair in the centre, and the others around them. Mostly printers use a machine to cut the outer edges; but it was common in the nineteenth century to leave the pages for the reader to cut. Even a hundred years later, if the topics you research are obscure enough, you might find yourself having to cut open the pages in a library book. A few publications still do this today; but this is probably the only mass market paperback in Japan that has the format. The reason is that the book is a kind of magic trick. If you read the pages that are open without cutting (a spread of two pages every sixteen pages), you read a short story. If you then cut open the pages, there's a full novel with a somewhat different story to it.

The short story features a man called Chiaki and a manager Satomi. Chiaki has memory loss and apparently also psychic powers. The novel also features Chiaki and Satomi, and Chiaki again has memory loss and apparent psychic powers; but many things that meant one thing in the short story mean something quite different in the novel. In particular, Awasaka seems to go out of his way to divide up a word (represented by two kanji) over the page break between the open and the uncut pages. The word in the novel is then a quite different one to the one in the short story. And many other things take on a quite different meaning in the new context. Many of these are trivial, in themselves unimportant for the larger story. The idea seems to be that the reader will enjoy finding the changes in meaning from what they read the first time.

It's certainly an enjoyable game. How successful are the stories? I think only moderately. The short story as a narrative works like many modern short stories as a sequence of unconnected  and inconclusive scenes, from which readers construct their own interpretation; but knowing that the story was a product of a trick construction, the interpretative effort is too much to ask. Some of the joins are a little clumsy too, syntactically correct, but looking like something no-one would ever write.

The short story is not a mystery, and the series detective Yogi Ganjī and his associates only appear once one has cut the pages to read the novel. That is a mystery, with two deaths in it; but it is not clear exactly what we are investigating. The same is true in The Book of Happiness; but there the eventual solution adds up to more than we had been expecting. Here the solution concerns what might be considered the more trivial parts of the narrative, and many elements are narrated at the end rather than deduced. It does hold some surprises though; and as part of Awasaka's craftmanship, several of the differences between short story and novel also have thematic relevance to the ending.

The title, incidentally, refers to a performance by spiritualists or stage magicians, in which after an audience member wrote down several names of living people and one dead person (known only to them), the performer would find among the various folded pieces of paper the one referring to the dead person.
Posted by nigel.holmes at 08:14 No comments: